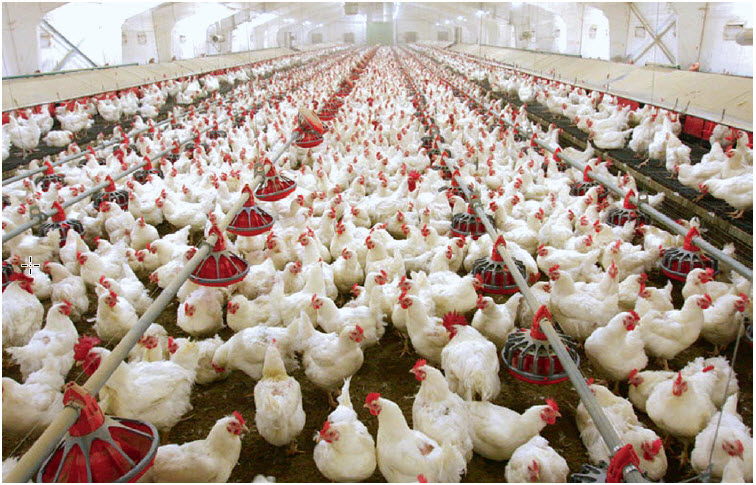 The poultry industry in India represents a major success story. What was largely a backyard activity before 1970s has transformed into a vibrant agribusiness with an annual turnover of over R1,00,000 crore. Today, India is the third largest egg producer in the world (after China and the US ) and the fourth largest broiler producer […]

The poultry industry in India represents a major success story. What was largely a backyard activity before 1970s has transformed into a vibrant agribusiness with an annual turnover of over R1,00,000 crore. Today, India is the third largest egg producer in the world (after China and the US ) and the fourth largest broiler producer (after China, Brazil and the US ). India, where the broiler bird was not even known till 1975, currently accounts for 3.8 million tonnes of broiler production, while it produces over 81 billion eggs every year (26 million eggs per day). Over 6 million people are employed in the sector. Poultry has emerged as one of the fastest growing segments of the agricultural sector in India today. While agricultural crops have been growing at a meagre rate of 1.5-2 per cent, poultry products have been rising at 5-6 per cent. In fact, broiler production has shown a robust growth in excess of 8 per cent over the last few years. This momentum is expected to be maintained, going forward as well, in the wake of positive macro and micro economic factors.

On the demand side, favourable socio-economic factors have bolstered consumption significantly. The per capita egg consumption has gone up from 30 eggs per annum a couple of decades ago to 68 eggs, and chicken from 400 gm to 3 kg. Nutritionists, though, recommend 180 eggs and 11 kg chicken per year. Most countries in developed economies consume over 240 eggs and 20 kg of chicken per annum. Thus, there is scope for a big jump in overall consumption and production, which offers a massive potential in the Indian context.

The last couple of decades have been quite eventful for the poultry sector, as it has undergone a transformation not only in terms of its production but also in terms of its structure. The entire value chain is now well organised and efficient. Various segments of the value chain – from breeding to farming and other downstream activities – have undergone integration, with large corporates playing the role of integrator. While this has brought about efficiencies in the system, it has also gone a long way in mitigating the major concern of price volatility. On one side, the poultry business in India is prone to consumption volatility on the demand side due to seasonality and periodic occurrence of religious festivals in different parts of the country. While on the other, it is heavily dependent on the production of maize and soybean, which are the two major ingredients for poultry feed which account for almost 70 per cent of the cost of chicken at the farm level. Any adverse impact on the production of these two crops has significant bearing on feed prices. High vulnerability to disease outbreaks (with the birds being kept in cages closely packed together) is also a major challenge for the sector. What aggravates the situation in India is the fact that only 4-5 per cent of the poultry production in the country undergoes processing due to lack of adequate infrastructure. Thus, the industry often encounters phases of highly volatile price realisations that impact cash flows and make the entire business quite a difficult proposition. 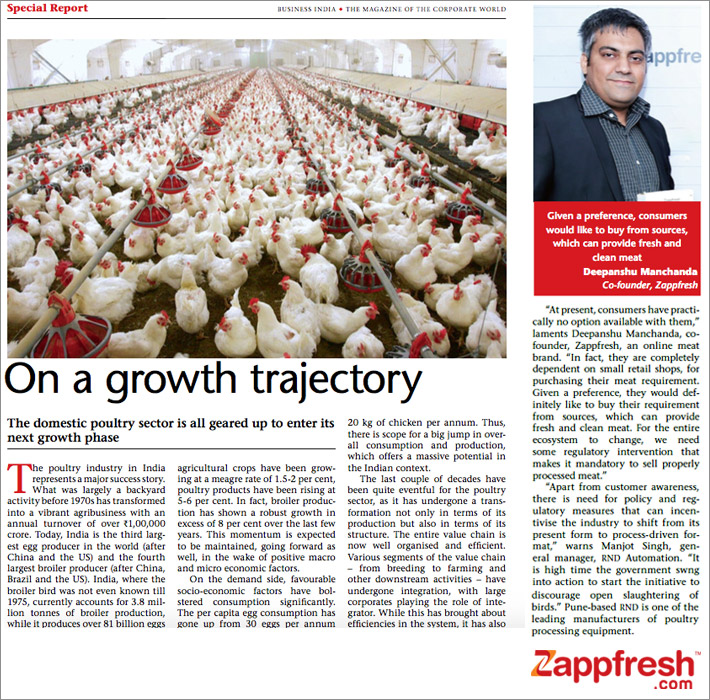 “At present, consumers have practically no option available with them,” laments Deepanshu Manchanda, cofounder, Zappfresh, an online meat brand. “In fact, they are completely dependent on small retail shops, for purchasing their meat requirement. Given a preference, they would definitely like to buy their requirement from sources, which can provide fresh and clean meat. For the entire ecosystem to change, we need some regulatory intervention that makes it mandatory to sell properly processed meat.” “Apart from customer awareness, there is need for policy and regulatory measures that can incentivise the industry to shift from its present form to process-driven format,” warns Manjot Singh, general manager, rnd Automation. “It is high time the government swng into action to start the initiative to discourage open slaughtering of birds.” Pune-based rnd is one of the leading manufacturers of poultry processing equipment.

In our busy lives, we often settle for what’s convenient. Today, most of us do not have easy access to high quality, bona fide avenues to source our products from. As a result, our priorities have shifted farther from tradition, authenticity and purity toward accessibility and compromise.